I took a whack at making Chicken Pad Thai again – this time using real ingredients instead of a bottled sauce – and it was WORTH IT!

Last time I thought I was bein’ all clever, buying pre-made sauce. Ha. It suuuuucked.

This time I invested in real ingredients. You need: Palm Sugar, Tamarind Pulp, Fish Sauce and Rice Sticks – stuff that’s available at Asian markets. I think they were like, um, less than $3/ingredient. Not sure how much that fish sauce was….but I’m pretty sure that I’m too cheap to spend more than $5 on fish sauce. The sugar, tamarind and fish sauce came in large enough containers that I can conceivably make pad thai at least 6 more times, probably. Just have to buy more rice sticks (I think they’re kinda like fettuccine, but made outta rice).

Instead of boiling the pasta, you soak the rice sticks to soften them. The recipe said to soak them for 30min, which is what I did. When I added them to the wok later I tasted them and they were…um…well, chewy is the polite way of describing them. I wish I’d soaked the noodles another 10-15minutes. I fixed the problem by adding about 1-1 1/2 cups of water to the wok, turning the heat to low, covering the pan and walking away for about 6 minutes. I came back and tasted the pasta – it had softened a lot. The softened rice sticks seemed to have soaked up a whole bunch of flavor too. HUZZAH! It was great! 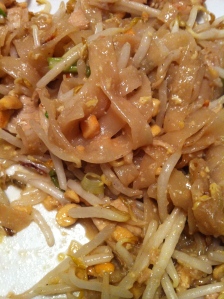 A little pile of happy

Dairy-FREE, I have no idea if rice noodles are gluten-free or not…sorry.

1/3 cup Tamarind Pulp **I bought mine in a moist dark brown/red block wrapped in plastic.

1/3 cups Fish sauce **Technically, this isn’t a Kosher ingredient because it doesn’t have the marks, but it’s made from anchovies and/or sardines. I’m ok with it. If you’re not cool with it, I think you can sub in soy sauce…but you’ll have to check that out for yourself.

2 ounces Palm sugar, grated (about 1/3 cup) **The recipe says you can sub in dark brown sugar, but I think it tastes different.

1 lb. Chicken breasts, boneless and skinless, trimmed of visible fat and sliced into 1/4-inch thick strips **This doesn’t describe how tall the breasts should be. I simply sliced them 1/4″ wide, but I should’ve sliced them crossways too. Or cubed it. Yeah. I should’ve cut the chicken into 1″ cubes. That would’ve been good. Next Time.

1/4 cup tiny dried Shrimp, soaked in hot water for 15 minutes and drained **Since we don’t eat crustaceans in this house, we skipped these.

1/4 to 1/2 teaspoon Chili flakes **Since I planned on sharing this with the babies, I used 1/2 of a dried chili pepper that I crushed with my dainty little fingers. Feel free to spice yours as you see fit.

12 ounces Dry Rice Stick Noodles, soaked in cold water for 30 minutes, drained **They could’ve soaked another 10-15 minutes, just pull them out before they get mushy. Um, and since this is only the 2nd time I’ve used rice stick noodles I have no idea how long it takes them to get mushy. Sorry folks.

1 bunch Scallions, cut into 1-inch lengths **I think this means long-ways…not 100% sure.

4 Limes, cut into wedges for garnish **My grocery store was out. Ahh well.

1- Soak the tamarind in hot water for 15 minutes. **Since the recipe doesn’t say exactly how much hot water to use, I guessed at it. I figured that since you need 1/3 cup pulp, I should probably use 1/3 cup water. Maybe I should email the recipe creator…if I get around to it.

2- Strain and reserve juice, pressing on pulp to extract as much liquid as possible. In small bowl, combine strained tamarind juice, fish sauce, and palm sugar.

4- In wok, or 12-inch non-stick skillet, heat 4 tablespoons oil over medium heat until shimmering. Add shallots and cook until just beginning to soften, about 3 minutes. Add garlic and cook until fragrant, about 30 seconds.

5- Increase heat to medium-high. Add 3 tablespoons oil and chicken (with any juices). Cook, stirring, until cooked through, about 2 minutes.

6- Stir in (dried shrimp )and chili flakes and cook for 30 seconds. Stir in noodles and remaining fish sauce mixture. Cook, tossing, until mixture is thoroughly coated and sauce has thickened slightly, about 1 minute. **Again, my noodles were the wrong side of chewy, so I added a cup+ of water to the wok, turned the heat down, covered the pan and walked away for about 6 minutes. When I came back and tasted the noodles they’d softened considerably. *clapping*

7- Push mixture off to side of pan and add remaining tablespoon oil to empty part of pan. Add beaten eggs and cook, stirring and breaking into small pieces with spatula, until cooked through.

8- Toss in sprouts, peanuts and scallions. Cook, continuously tossing, until heated through, about 1 minute. Serve immediately with lime wedges on the side.

I think the only real complaints I had with dinner were that it could’ve used double the sauce and the balance of chicken to noodles was off (I could’ve used 2 breasts instead of 4).

2 thoughts on “Doing my HAPPY DANCE!”