It was time to eat the fridge. Too many little bits of this and that hanging out that needed to be used up already.

So I had a tub of leftover beans hanging out in the fridge. The kids refused to eat them as is, and my attempt at sweet potato-black bean quesadillas left me my very own lunches for an entire week (translation: no one ate them but me).

So, what the heck was I gonna do with all these leftover beans?!?!

To the internet I turned – but alas, I saw innumerable recipes for the same bean burritos…or suggestions to freeze them for future soup creations.

Instead I decided to wing it. 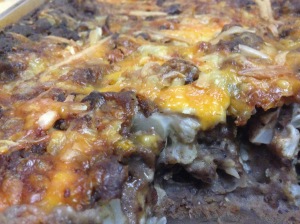 I threw the tub o’ beans into the blender, added in the rest of a tub of Hummus that was nearing it’s time on earth, and then because it was so very thin, I dumped in the rest of the box of an open box of cake flour (about 2 Cups). Bzhzhzhzh went the blender.

I had 3/4 of a head of cauliflower I needed to use, so I grabbed that outta the fridge.

I had about 5 different types of random cheese chunks that needed to be used up already.

I grated the cheeses & I chopped small the cauli bits. 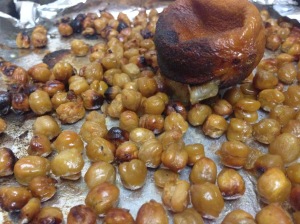 I dumped the cauli and 1/2 the cheese into a glass pan, smothered everything in the thickened bean sauce, stirred, added more cheese on top. Covered the pan with foil and threw it into the oven at 350 for an hour. I took off the foil and let it keep cooking until I could smell the melty cheese bubbling away (about another 15 minutes. Maybe 20. Who knows. I forgot to set the timer or look at the clock!). I let it cool for 15 minutes or so while I broiled some chickpeas in the same oven (tossed a couple of drained cans of chickpeas with olive oil and a shake of salt. I also threw in a lemon to cook down with it too. Adds nice flavor).

It sure didn’t look appetizing – but J asked for SECONDS.

Of course, he covered his with crunchy chickpeas and another handful of the shredded cheese.

Every once in awhile, I make a hot mess that’s FREAKIN’ AWESOME. Thought you’d like to see it too. *grin*