The last few times my in-laws have been over we’ve grilled Cedar Plank Salmon for them. By we, I mean C, the Master-Of-All-Things-Grilled. Served with a salad and a side of vegetables roasted in Garlic Confit, they were lovely meals. The other day C asked me if I thought a different type of fish would taste as nice on the cedar planks. “I dunno,” I replied. “Let’s see what’s on sale at the market this week and give it a try.”

So today I popped into the Fish Counter at Fairway and asked Carlton the Fish Man wielding the fish knife, what he thought about trying Cod on the planks. “Nah,” he said. “Cod is too mild. It’s not like Salmon, the flavor won’t seep into the fish. You’d be better off grilling it.”

So I started talking with my best friend Google about her grilling fish recipes. She suggested I try marinating it and then grilling it.

She handed me a recipe for a simple marinade using broth, olive oil, worcestershire, garlic and paprika. And so the fish marinated in a ziploc in the fridge for about an hour and a half/2 hours. C laid the grill with foil, oiled it and grilled the fish for about 10 minutes, until it flaked easily. I retained the marinade and boiled it down to make a lovely little sauce. Served with a side of steamed broccoli and a nice green salad – and voila! Dinner is Served! 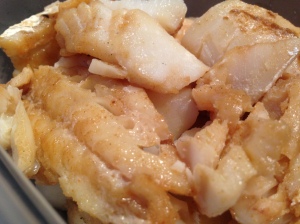 3 fillets Alaskan Cod **I used 3 large and one small to feed 4 Adults and 2 Toddlers.

1 teaspoon Paprika **I considered subbing in Smoked Paprika, but a little voice of reason popped into my head and dissuaded me.

salt (this depends on the saltiness of your broth, you may not need additional salt) **I didn’t add any in. 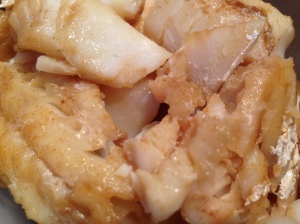 1- Put all the ingredients, except the fish, in a bowl and whisk to combine. **Okay, okay, I dumped everything into the ziploc and called it a day.

1- Place the fillets in a Ziploc bag and pour the marinade over them. Seal and let rest in the refrigerator for about an hour.

2- When ready to cook, preheat the grill. Spread a little bit of olive oil on one side of a sheet of aluminum foil and place the foil directly on the grill.

3- Lay the fish on the aluminum foil and close the grill.

4- Meanwhile, pour the remaining marinade into a small pot, cover and bring to a fast boil. Cook at a rolling boil, uncovered for at least 10 minutes. (If you’re worried about a sauce that touched raw fish, reserve part of the marinade to cook before putting it on the fish.)

5- Keep an eye on the fish. It will separate into flakes to let you know it’s done. It takes about 10 minutes on the grill or in a 425ºF oven.

6- Serve with the sauce and enjoy! 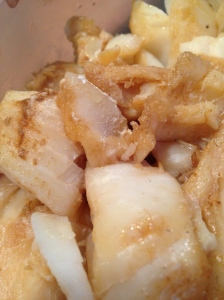 End Result: This was a good recipe! I think everyone ate at LEAST one serving, babies included. Can I still call them babies if they’re almost two? The marinade complemented the fish and served as a nice simple sauce for steamed broccoli too. Fish + Steamed Broccoli + Salad was a lovely meal.

A glass of red wine never hurts either. *wink*