1- Braised leeks are better with lemon….which I *of course* forgot to add tonight. Sigh. 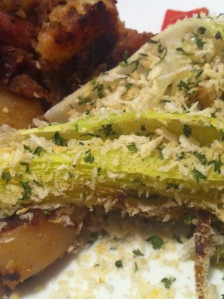 My Wish For You:
May you always read your recipes better than I do.

2- Kosher Kielbasa sucks. C and I BOTH agreed that Hebrew National hotdogs woulda tasted MUCH better in this recipe.

At least it was a pretty dinner

Made Potato Kielbasa Skillet for dinner tonight, along with round #2 of Buttery Braised Leeks with Crispy Panko Topping. Neither of which R ate. J ate three bites of his meal before deciding to rip his slice of bread into tiny tiny bits and rubbing those into his hair. Deep sigh.

Do you mostly go grocery shopping for ingredients to recipes? or do you shop for basics and create as you go? I find I do both, but more often I buy stuff  and figure out the recipes, sometimes making them up, as I go along – usually after much discussion with my best friend Google. Occasionally I’ll shop the ingredients, but find that more…complicated. You’ve gotta think ahead and stuff, and, as we all know, people who make monthly meal plans and freezer meals and shopping lists confound me.

3 Tablespoons Water **Only use if microwaving. If boiling potatoes – omit.

4 cups Fresh Baby Spinach **I forgot to buy and couldn’t deal with defrosting, so I subbed in two bell peppers (one red, one yellow). It was delicious.

5 Bacon strips, cooked and crumbled **Obviously, I didn’t use. I added in a few drops of Liquid Smoke to attempt to replicate the smokiness of Bacon. C laughed. Said he couldn’t taste anything resembling smokey. Sigh

1- Place potatoes and water in a microwave-safe dish. Cover and microwave on high for 4 minutes or until tender; drain.**Or just boil the stupid things. Oh – and I cubed mine AFTER boiling…because I can’t seem to read a recipe today. *grimace*

2- In a large skillet, sauté kielbasa and onion in oil until onion is tender. Add potatoes; sauté 3-5 minutes longer or until kielbasa and potatoes are lightly browned.

3- Combine the brown sugar, vinegar, mustard, thyme and pepper; stir into skillet. Bring to a boil. Reduce heat; simmer, uncovered, for 2-3 minutes or until heated through. **The sauce got sucked into the potatoes so quick that there wasn’t anything left to boil. I asked C if he thought it needed more sauce, I’d double the ingredients quick quick. He tasted and said, “Nah. It’s delicious. Don’t add more.” So I didn’t.

4- Add spinach and bacon; cook and stir until spinach is wilted. **As stated above, I used 2 bell peppers and nixed the bacon. You should nix too. Not that C agrees with me. He thinks bacon makes everything taste better. He’d probably use bacon toothpaste, if they made it. Blech. 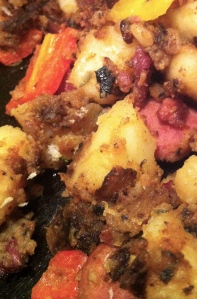 End Results: We both liked the flavor of the veg and wish I’d used hot dogs, but beyond the meat choice, this recipe is a keeper!